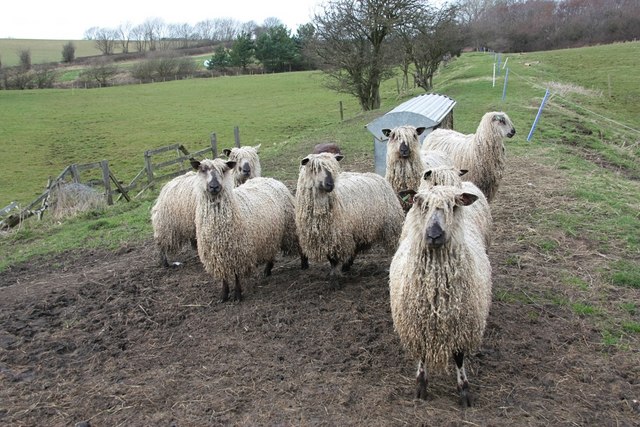 According to Wikipedia:  The Teeswater is a breed of sheep from Teesdale, England. It is a longwool breed of sheep, which produces a generally large-diameter fibre. The breed is raised primarily for meat.  Teeswater sheep have been bred in northern England, Great Britain for about two hundred years; the breed was rare by the 1920s, but the breed has seen a renaissance since World War II. The Rare Breeds Survival Trust has categorised the breed as ‘at risk’.  The Teeswater Sheep Breeders’ Association was formed in 1949 with the aim to encourage and improve the breeding of Teeswater sheep and to maintain their purity and particularly to establish the supremacy of Teeswater rams for crossing with hill sheep of other breeds for the production of half-bred lambs.  The wool of the Teeswater should be fine, long-stapled with high lustre with each lock hanging free and with no tendency to felt. There should be no dark fibres in the fleece, which should be uniform in texture over the whole body. The Teeswater produces a kemp free fleece, a characteristic it passes on.

I have only ever used Teeswater locks in needle felting and wet felting.  I have also knitted with them to make a scarf.  The fluffy ends of the locks are very soft as they are the closest to the skin and feels completely different to the rest of the locks.

The locks are easy to dye and are sold often for decoration.  I received a 43g batt from Benridge Woolworks in my recent order.  The fiber felt really soft and there was not much of a smell to it.

I spun these straight from the batt. There was very little VM and it was lovely to spin.  Teeswater has a micron count of 40-60 which makes it quite a sturdy fiber.  A 100g batt from Benridge costs £20 compared to £2.88 for roving from WOW.  You can do the maths.

I think there may be some lanolin still in here as the ball feels a little stiff.  We will see how looks after being washed.

I scoured the skein as I did with the white BFL, but it was pretty clean with no residue.  This skein is quite yellow and a bit coarse.  I don’t expect that wool with a high micron count would be very soft, but I thought it would be softer.  It is very sturdy though.

I will need to try the Teeswater from WOW to make a comparison.  I think it might be easier to spin from roving as the fibers are going in the same direction.  Just waiting for the next sale.