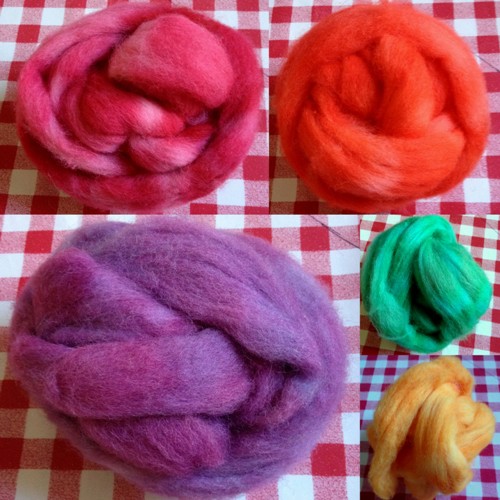 This is English 56’s that I recently spun.  I bought this roving after reading how a woman used it to felt a rug.  It felts, but takes a really long time to do so.  I had some left over that I didn’t know what to do with, but eventually decided to try and spin it.  I first carded the green with the same color of hemp (plus a yellow hemp) and a similar color of Corriedale to make these batts.

I spun the batt in a woolen style.  I also spun the rest of the rovings on their own as I didn’t have any other coarse fiber to blend them with.  These are the singles below

It may not look like it, but I was able to spin a really thin and consistent single, for me.  As I mentioned in previous posts, it seems that the coarser the fiber, the finer I am able to spin it. 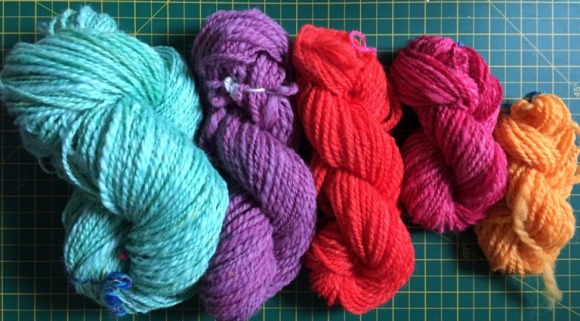 Although the yarn is a bit scratchy, it is surprisingly springy, fluffy and strong.  My dyeing wasn’t particularly consistent and there are some variations where the fiber took up more color in some places than others, but I don’t mind that.  This yarn will be used to make placemats and such or used in tapestries.  I am really happy with how they turned out.  the biggest surprise turned out to be the core wool that I spun.  Here is the single.

I had a small issue when I was finishing the yarn.  I stupidly soaked it with a green scarf.  Some of the color leached into the yarn.  I didn’t think it was going to be a problem as the scarf is 70% acrylic.  In any event, I left the yarn to soak in some vinegar and then later dyed it in the microwave.  I tried for a mottled green and brown look, but I got the below instead.

I got this lovely deep forest green that the camera doesn’t give justice too.  I added all the colors plus some black and this is what I got.  Some areas are darker than others on this yarn, but it is to be expected when doing low immersion dyeing.  If I had mixed all the colors together and put the dye in the water before adding the yarn, the color would be more consistent.  I couldn’t love the color more than if I planned it intentionally.  The big surprise is how soft this yarn actually is.  I spun it worsted, but it is really soft and fluffy.  I wouldn’t wear a scarf made from it, but I would wear a scarf if a little bit was used, or I would be happy to have it in a blanket or even in a knitted cardigan.  So, my unknown breed core wool is really nice!

This is the scarf I made for my friend/neighbour’s birthday and is the one that ‘dyed’ my core wool yarn.

This scarf is in shades of sage green and cream and was made with a 7.5 dent reed.  I warped this one to 100 inches as our friend is a very tall guy.  It ended up being 88 inches long without the twisted fringe.  The yarn is  Hayfield Spirit which is 70% acrylic and 30% wool.  The camera doesn’t like this green.  I made a poncho with the same yarn.

This poncho is now living in San Francisco as I gave it to my daughter in law for her birthday!  I really love the color and have enough to make at least one more scarf out of it.

Another thing I have been doing is thinking about re-working some of the neck cowls I made with my leftover handspun.

This is the first cowl that I want to re-work.  These cowls look really great on and are very warm.  I saw on one of the FB groups where someone had made a small v-cowl with built in button holes and that gave me the idea to re-work this one.  I really like v-cowls and they look really lovely over a jumper.  So, this is my idea. 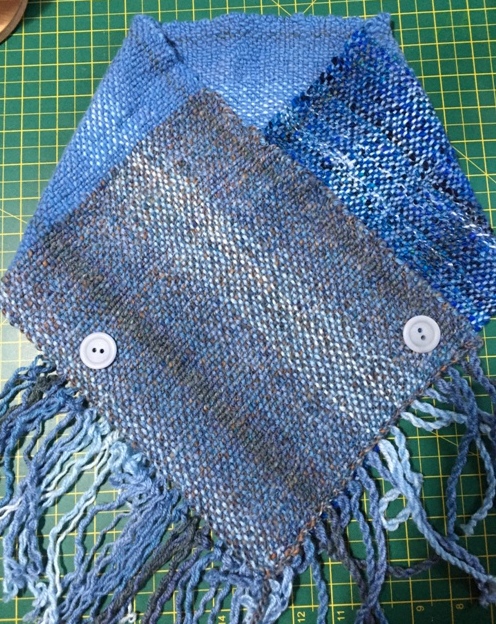 I unpicked where I attached the fringe.  There are two ways I can have the look above.  I can either sew the buttons underneath and stitch a buttonhole on top, or I can just add snaps.  I am a bit torn on what to do.

When I put this to the Sewing for Weavers group, there were a lot of contradictions and umming and ahhing.  I thought it would be pretty straightforward to add a buttonhole with my buttonhole feature, but apparently not.  The problem isn’t necessarily about what I want to do, but how to do it as sewing woven fabric can be tricky.  I am going to have a test run on a piece of weaving I had to cut and see how it goes.  If it goes well, I will attempt it on the scarf above.  If not, I will add snaps.  One can only try.

So, I finished my contract and am starting a new one this week, so no rest.  Which is good timing because my oven just kicked the bucket!  The things we do to get the things we need!   Needs must.  Fortunately I warped up the loom for the very last Christmas scarf for the year!  This will give me something to do after work.  I also succumbed to a Black Friday deal from World of Wool.  There were some blends I wanted to try and also some breeds.  This was a good opportunity to try new things and buy some items that were on my wish list.  I also got delivery the next day, so I was able to spin some fiber this past weekend!  So far I’ve spun a Shetland blend and a tweed blend.  I am very excited to spin all of these blends and will obviously be updating you as and when.

Until then, happy crafting!

6 thoughts on “Itchy And Scratchy, Spinning The English 56’s”