So, this is the second pair of oven mitts based on the tutorial by Lamorna Thomas in Felt Matters magazine. I mixed things up a bit this time as I had found it quite challenging to felt the grey mitts in Bergschaf only.  It was suggested that I use the bergschaf with merino.

Although I have lighter colored merino batts, I chose the natural brown so that I could see the migration easier.  I used the same template and measurements as for the grey mitts.  However, I laid down a layer of merino, bergschaf and merino for the thinner decoration side.  For the other side I added an extra layer of bergschaf topped by a layer of merino.  The center part of the mitts is 3 layers.  I also decided to make a loop this time.

As before, I made heart decorations from the Shetland prefelt. 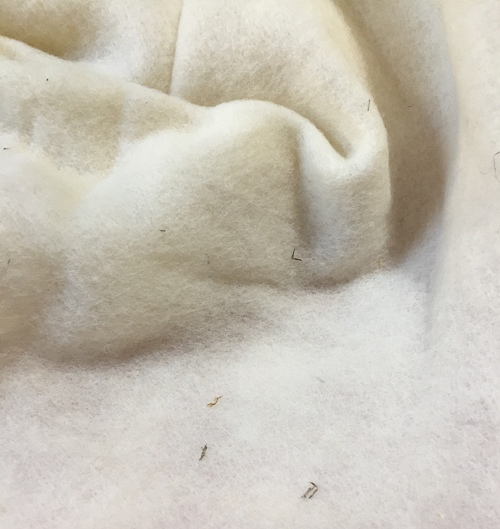 As you can see, there is a fair amount of VM in it.  You could spend days picking it out, but magically it does wash out during felting.  This prefelt is quite sturdy, but it also sticks well.  It still retained its nice crisp shape in spite of all the felting.

Once everything was all laid out and wet down, I left the piece overnight.  The next day I did a lot of rubbing, sanding, and rubbing.  Then I left it alone as I had other things to do.  The day after that I warmed the piece up in the microwave and proceeded to do the rolling.  I rolled a lot more than recommended in the tutorial.  I think the merino helped felt the piece more quickly than just the berschaf on its own.  I didn’t get it to felt to the length I wanted, but I wasn’t surprised as I had more layers of wool to felt.  There was some migration, but it was really minimal in comparison.  I thought there would have been more. 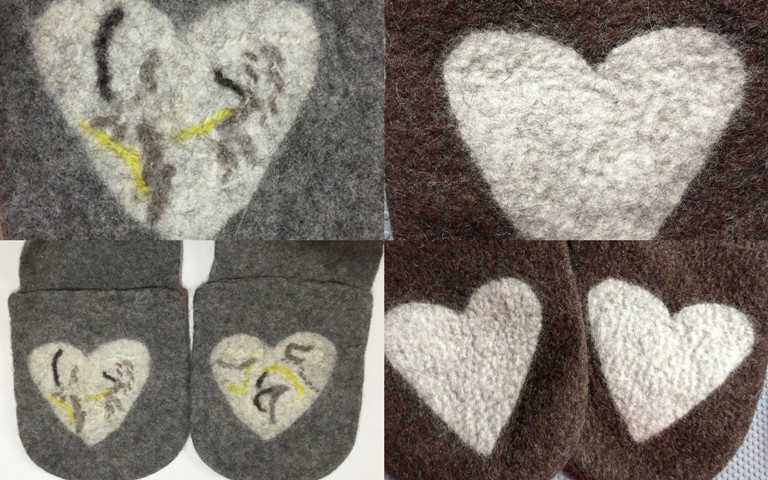 If I pinch my fingers across the brown mitts, I pick up very little fiber, unlike the grey mitts.  Also, the brown mitts are more firm and less spongy and stretchy and is more what I would expect from making anything with merino.  I shaved the hearts on the left side of both mitts and a lot of hair came off the grey pair, but not so much on the brown pair.

I haven’t steamed or ironed these yet, but for me, the brown pair came out better in shape and texture.   The grey mitts weigh 90g and the brown weigh 109g.  As I said before, I used more wool in the brown pair because of the extra layers.

I ordered some bergschaf from another supplier and will make another pair of these, but using the colors in the tutorial this time and to see if there will be any better result.