I made some neck warmers/scarves with matching brooches over the last few days.  I wanted to try some different techniques and combine some that I know. I also wanted to use some fiber that I got in the Botany Lap Waste from World of Wool recently. 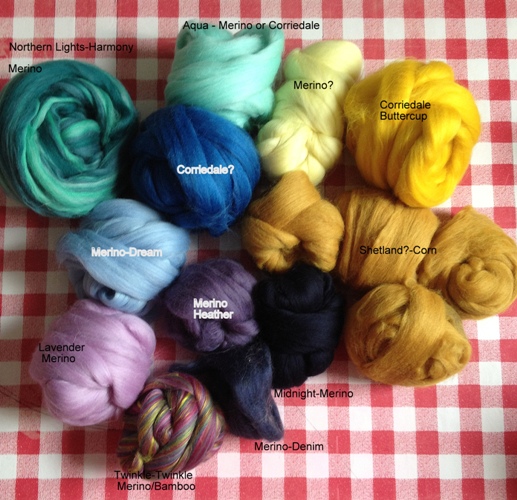 I started with the Northern Lights Harmony.  This is a merino blend.  I had purchased a similar blend in other colors from DHG in Italy, except their blend is 19 mic superfine merino.  I do not believe Northern Lights is that fine and is probably all 23 mic.  This blend is very stripy.  I have learned that this type of roving is primarily used for spinning.  I have used it to make flower brooches, but I have never been happy with how the colors came out. 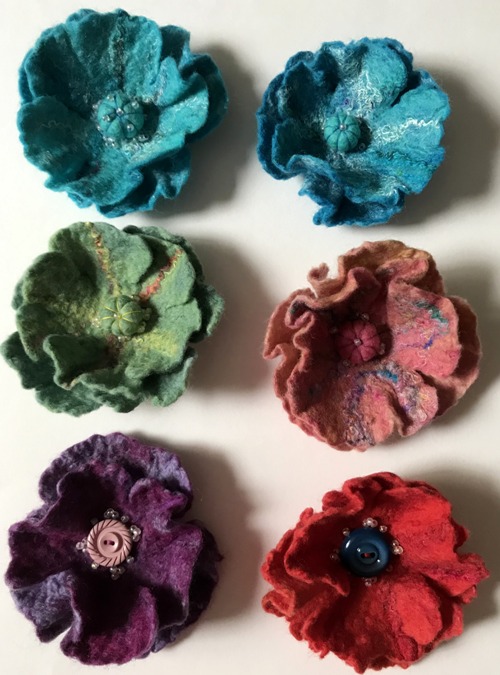 I’ve used stripy roving for the green, pink and red brooches.  I thought the different colors would show up more, but it didn’t.  That is because the colors blend too much and can get muddy when laying out in the traditional method.  The way to use this roving for felting is to lay it out in one long strip and spread it out sideways.  I decided to make a sample at 4 feet long.  The reason for that is two-fold.  Firstly, I can lay it out on my table without pulling out the leaves, and secondly, I have the exact size piece of bubble wrap to lay it out on! Heh!  I also know that however it shrinks, I will still have enough for a neck warmer.  If one is going to make samples, there is no point in making anything too big in case it goes wrong.  If it goes right, then you have something you can actually use. 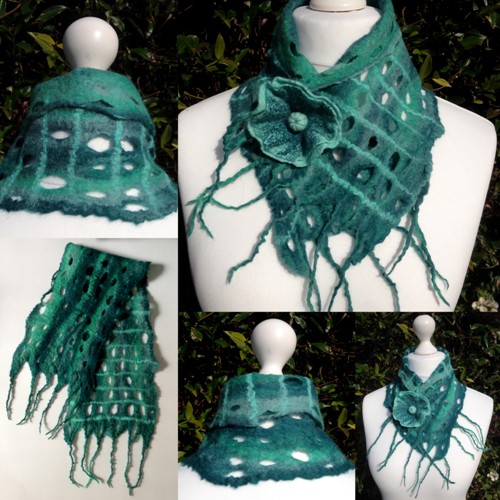 Now, I have used this method of making cobweb scarves before, but in a single color of roving.  I love how I got the variation of the colors here that I didn’t get in the brooches.  For added interest, I added very thin strips of roving in a pale color that also happens to be in this mix.  I made a grid without actually laying out a grid.  I added extra bits of roving for the edges to make tassles.  This is a very fine, thin felt.  I only used a third of the roving and stretched it out.  It weighs 17 grams.

I then wanted to try something different with the Twinkle Twinkle merino and bamboo blend.  I would normally pull off tufts of this type of fiber and use it as bling. 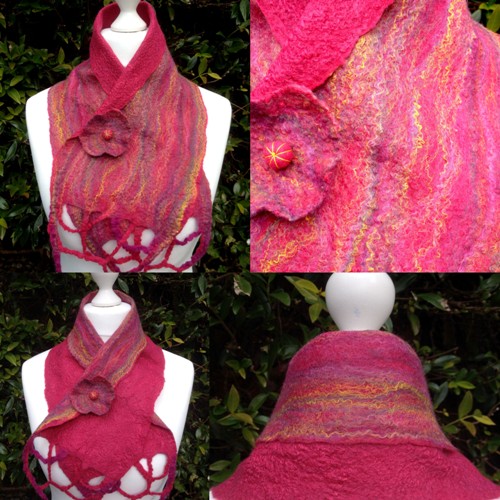 Here I laid out some viscose, then 19 mic merino and pulled about a third of the Twinkle Twinkle to the same length of the layout and spread it out on top.  I also made some lace for the ends of the scarf.  After this, I moved on to red. 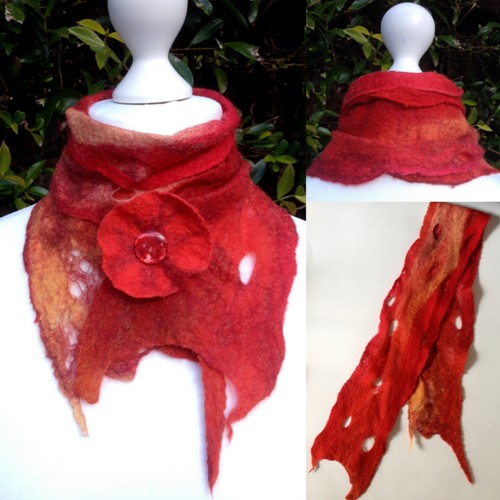 This lace was made using the 19mic merino blend from DHG in Moulin Rouge.  I bought this when they had an offer in February on Valentine’s colors.  The roving is not as thick as the green I used above, but I still used one third of the width.  I had a hard time opening it up to pull off my length as it looked like it was starting to felt.  In any event, I spread it out as far as I could.  It is not very wide.  This time I took some Glitzy roving from WOW and pulled it sideways across the layout.  It is so thin you can barely see it but there is a lot of sparkle on one side.  I love how narrow it is and it only weighs 11g.

My last scarf is more vibrant. 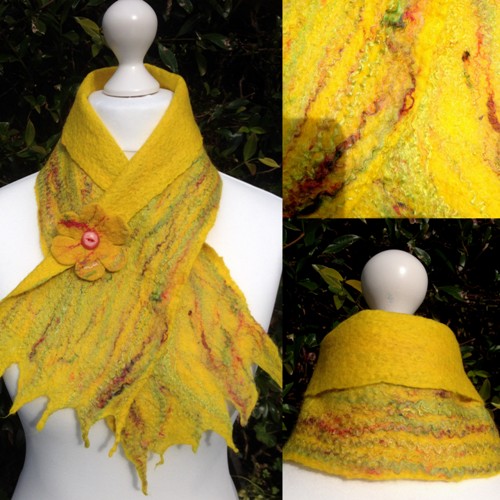 I have a lot of yellow in my stash and it is all 23 mic merino from WOW.  I thought it would look good with the Equinox blend from WOW that I use as bling and which I tend to use with green.  I laid out a superfine layer of yellow wool and used a quarter of a strip of the blend on top and spread it out sideways.  A lot of people have issues working with yellow, but I really like this scarf.  It is vibrant and feels like sunshine.  Although the merino is 23 mic, it is still very soft. 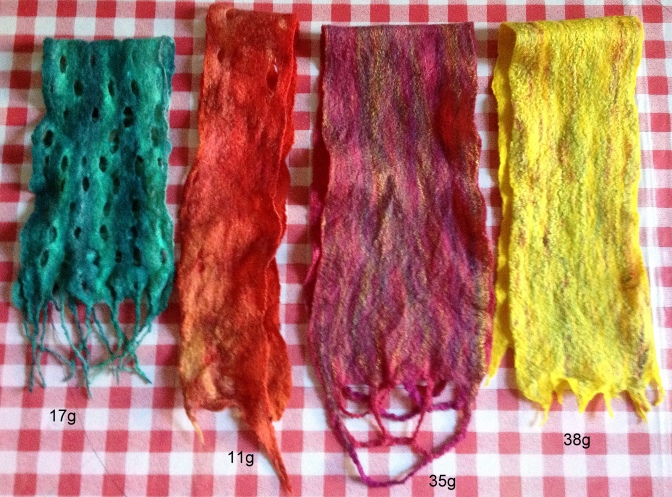 Here are all the samples laid out side by side.  It is something to know that they all started out the same length (not including edges).  🙂