I have been wet felting flower brooches for the Fibre Fest in April.  It has been suggested to me that I have some small inexpensive items to sell that will off-set my more expensive items.  I ordered some shipping tags to put the brooches on.  As I placed them in my box I realised that I still need to make more!  Last week I made some pre-felt and made some poppy brooches.

I wanted to make some that were a bit more complicated and that I could charge a bit more money for.  I made the pre-felt at the same time I was making another project.  Although I enjoyed making the poppies with their lovely centers, they are quite time consuming and right now I don’t have the luxury of making any more of these due to time constraints.  I had bought a fair amount of felt and pre-felt from World of Wool as I thought I might use them for 2D projects.  Pre-felt is also useful as decoration in wet felting and I bought some when it was on offer.  Although it is not difficult to make your own pre-felt for projects, if you have some already made, it would be a shame not to use it.  I had a sheet of red pre-felt that I thought would be good for some simple poppies.  As an experiment, I also used some white pre-felt as centers. I cut out circles and then laid out some extra merino wool, silk and viscose fibers on each circle.  I wet them out and then sanded them at the same time.  In hindsight (this is a tip) I should have just decorated the whole sheet in one go, sanded and then rolled before cutting out the shapes as it would have saved some time, but I just like to make work for myself sometimes.  The ones with the white centers came out better than expected.  Although the simple poppies with buttons pale in comparison to the more complicated ones, they are still pretty and shiny with the silk, and they do look like poppies.  As I was feeling quite chuffed about my pre-felt discovery, I decided to make more simple flower brooches. 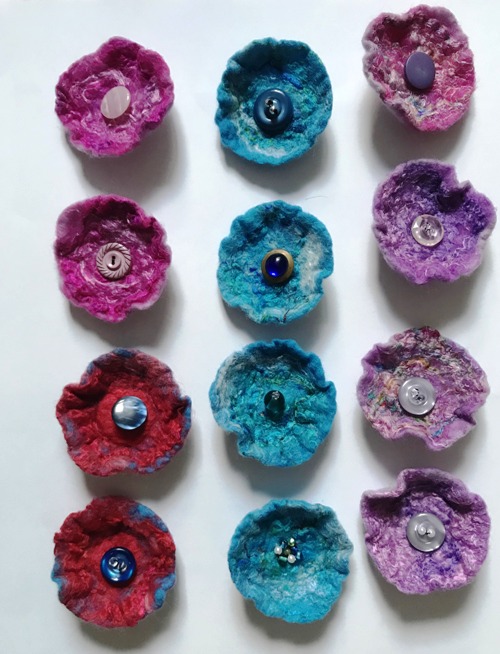 These are more like fantasy flowers.  I used  a blue and lavender pre-felt this time.  To mix things up, I added different colors to the base.  I then popped them all into muffin tins which went into the airer to dry.  I was able to finish them off in the evening as they dried quickly.  I chose a bunch of buttons from my stash, along with some beads, and  binge watched Riverdale while stitching everything together. (It isn’t anything like the comics I used to read.) I don’t think people will appreciate how much effort goes into creating something small, especially as those brooch backs can be a pain to sew on.

So far, I also have these, which you may have seen.

The photo of the orange brooches don’t really do them any justice as there is quite a lot going on with the different fibers and need to be appreciated in person.  I have some nice cerise pre-felt, so I will make some more brooches, at least enough to fill up a muffin tin!  I might even have a go at making rosettes.  I was thinking of making a batch to put together while at the craft show, just to keep busy during slow times.

I was chatting to my neighbour today who has the week off for half term and offered to teach her 10 year old daughter how to wet felt brooches.  I think it this type of thing is great not only to teach children how to wet felt, but also to sew on buttons! 🙂