I am currently finishing up another neck cowl and hat set.  I am using up the reds.  It is interesting to note that there is really not a wide variety of reds available in merino wool.  You basically have scarlet, a true red, and begonia, which is like a cadmium red or red orange.  Even crimson is more like a shade of pink when you compare to the two reds above, as is poppy.  As I color code my wool, I really don’t have a lot in the red drawer.  In fact, I believe that I will need to order some more red at some point.  Oh dear! 🙂  However, I had a lot of leftover bits of red wool from other projects.  I tend to save everything as they can be useful for making batts on the blending board.  This is what a felting batt looks like. 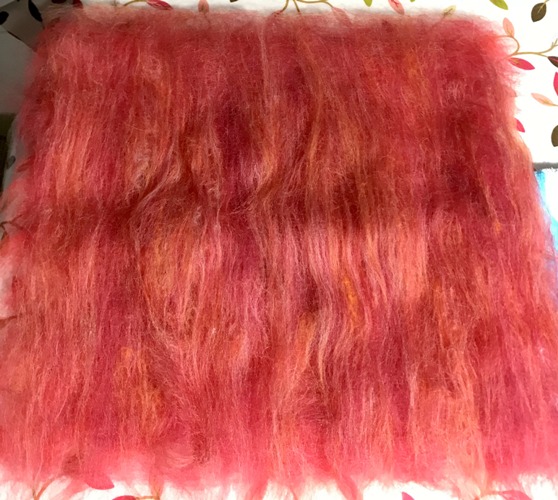 In fact, it pretty much looks like a spinning batt with the difference being that the wool is laid out on the board vertically, horizontally, and diagonally and very thinly, instead of it all being laid out vertically.  You can get a lot of mileage out of a small amount of wool when making felting batts..  It is a good way of using up leftover bits of roving that you don’t have enough of to make anything with.  I made up six of these to make a neck cowl.  More about that in another post.

So, I made a spinning batt that looked like the one above out of all of the little bits of red merino and odd bits of roving in similar colors.  Instead of pulling off the whole batt from the blending board, I made rolags.  According to Wikipedia: ‘A rolag is a roll of fibre generally used to spin woollen yarn. A rolag is created by first carding the fibre, using handcards, and then by gently rolling the fibre off the cards. If properly prepared, a rolag will be uniform in width, distributing the fibres evenly.’  I managed to get three rolags off of the blending board.

They look so pretty that you almost don’t want to use them!  I used up all of my spare red and added some merino that was in my orange stash.  I took a little break from felting a hat to spin these rolags into some yarn.  I don’t actually have any yarn in this color and I wanted to make some up for a project where I will be incorporating yarns.  So this is what I made.

This is all three rolags on the spindle.  It is not good enough for knitting with and that wasn’t what I was after.  I wanted some parts to be thick and less twisted so that it would felt without too much trouble and still have some texture.  I think that if I was ever going to get into spinning, I would most likely get a spinning wheel as your arms can get quite tired working with a drop spindle.  I’m not sure if my technique was correct, but I managed to get what I need and that is the main thing.  It didn’t take too long to get this done either.

So, never throw anything away, you never know when it will come in handy!

One thought on “Making Rolags and Spinning Some Yarn”